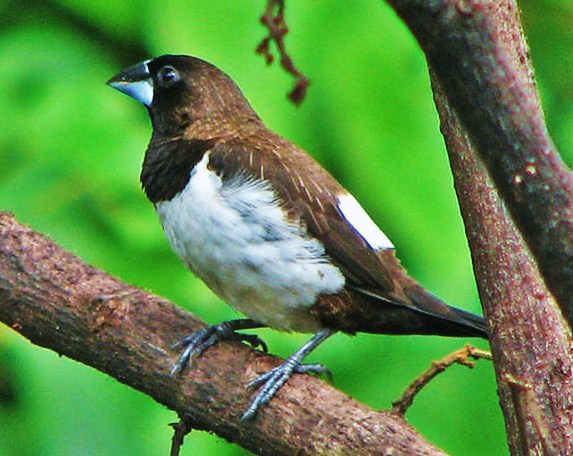 Common name:
white-rumped munia (en); bico-de-chumbo-de-peito-branco (pt); capucin domino (fr); isabela (es); spitzscwanz-bronzemännchen (de)
Taxonomy:
Order Passeriformes
Family Estrildidae
Range:
This species is found in the tropical areas of continental Asia, from India and Sri Lanka, through Nepal and Bangladesh and into Myanmar, Thailand, Laos, Vietnam and southern China. They have been naturalized in some parts of Japan.
Size:
White-rumped munias are 10-11 cm long and weigh 11-13 g.
Habitat:
They are found in coastal dunes with plenty of scrubs and grasses, also in degraded or cleared magrove land, forest clearings and secondary growth, and along rivers, roads and logging tracks through forests. They are also found in plantations, orchards and urban gardens. They are found from sea level up to an altitude of 2.000 m.
Diet:
The white-rumped munia mostly eats seeds from grasses and other plants. In areas with rice paddies, the rice seeds are their main food source. They are also know to take bamboo seeds and the seeds from Casuarina cones. In coastal areas they eat filamentous green algae (Spirogyra spp.).
Breeding:
This species breeds all year round. Both sexes participate in nest building. The nest is a rough looking ball with end-entrance part concealed by a wispy fringe of grass floweringheads, built of bamboo and other leaves and coarse grass-stems and heads , with an outer layer of twigs and larger leaves bound in by thin epiphyte stems and fibre from the base of palm-fronds. The nest is generally placed on a bamboo clump, or among leafy twigs of a shrub or small tree. The female lays 4-5 matt white eggs, which are incubated by both parents for 13 days. The chicks are fed and brooded by both parents and fledge 21-25 days after hatching, but only become independent 2-3 weeks later. The entire family will continue to roost in the nest at night.
Conservation:
IUCN status – LC (Least concern)

The global population size has not been quantified, but the species is described as common or locally common over its very large breeding range. The population is suspected to be stable in the absence of evidence for any declines or substantial threats.