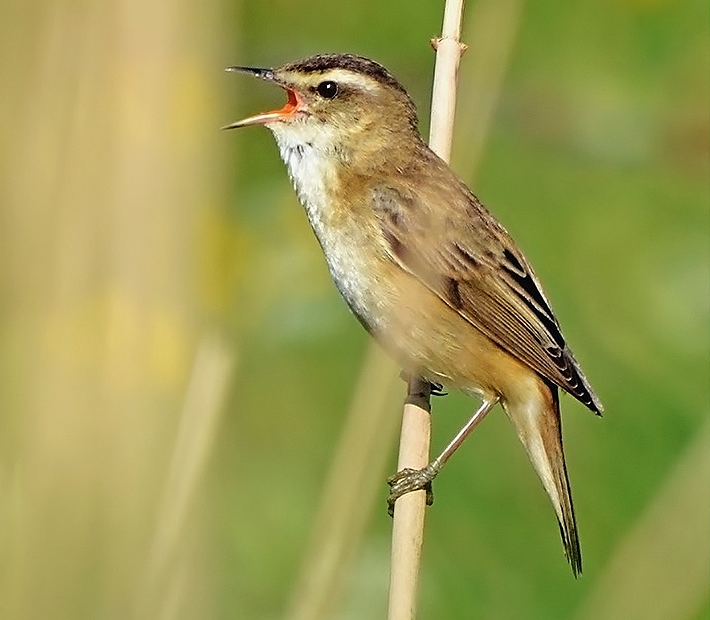 Range:
This species breeds throughout most of Europe and western Asia, as far south as northern Spain, northern Italy, Turkey and Kazakhstan, and as far east as central Siberia. They migrate south to winter in most areas of sub-Saharan Africa.

Habitat:
The sedge warblers is mostly found in freshwater wetlands, particularly within reedbeds, but also in wet grasslands, water storage areas, dry savannas and arable land. They occur from sea level up to an altitude of 2.400 m.

Breeding:
Sedge warblers breed in April-July and tend to be monogamous. The female builds the nest, a cup-shaped structure made of grass, stems, leaves and spider webs, woven around vertical plant stems, often reeds. The nest is lined with reed flowers, animal hairs and plant down. The female lays 3-7 greenish-yellow eggs with brown mottles, which she incubates alone for 12-15 days. The chicks are fed by both parents and fledge 12-14 days after hatching, but continue to receive food from the parents for another 1-2 weeks.

Conservation:
IUCN status – LC (Least Concern)
This species has an extremely large breeding range and the global population is estimated at 17,8-44,4 million individuals. The population is suspected to be declining due to loss of wetlands, droughts and the expansion of the Sahara desert, all affecting their wintering areas.