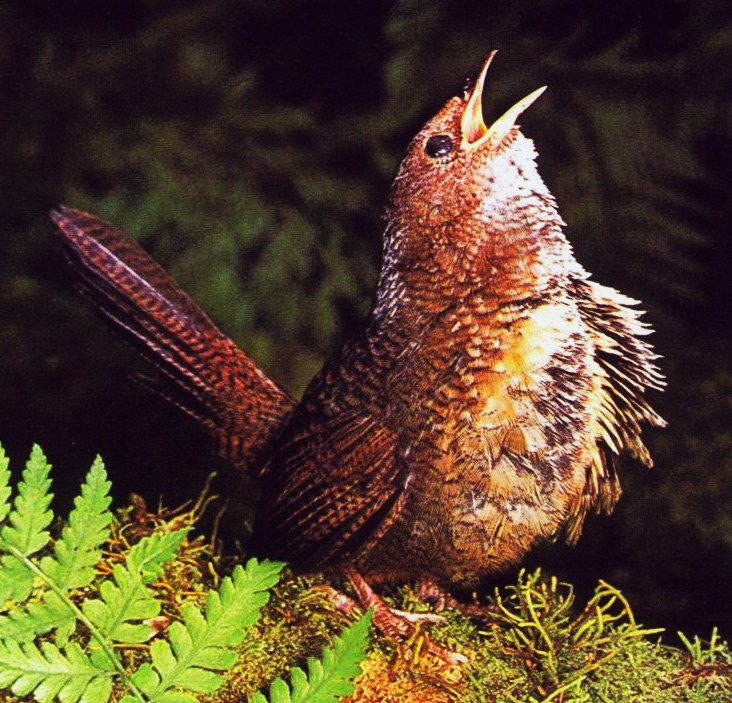 Common name:
rufous scrub-bird (en); pássaro-do-mato-ruivo (pt); atrichorne roux (fr); matorralero rojizo (es); rostbauch-dickichtvogel (de)
Taxonomy:
Order Passeriformes
Family Atrichornithidae
Range:
The rufous scrub-bird is endemic to eastern Australia, occurring in isolated populations in New South Wales and Queensland along the Gibraltar and Border Ranges, Barrington Tops, Hastings Range and Dorrigo/Ebor.
Size:
These birds are 16,5-18 cm long and has a wingspan of 19 cm. They weigh 24 g.
Habitat:
The rufous scrub-bird requires dense, metre-high ground cover, a moist micro-climate and deep leaf-litter, as found in rainforest and adjacent wet eucalypt forest. The habitat used in rainforests is usually associated with canopy openings caused by natural tree-falls, selective logging, or watercourses.
Diet:
They forage on the ground, beneath leaf litter and amongst other debris, and feed on small invertebrates, including scrub-snails, eggs, worms, amphipod crustaceans and insects. Insect food consists mostly of beetlesand their larvae and pupae, but they will also take smaller insects.
Breeding:
Rufous scrub-birds are monogamous and breed in September-December. They build a dome-shaped nest composed of dead leaves, pieces of dead tree-fern and grass, and lined with grasses and wood pulp. The nest is placed close to ground, usually within a clump of sedge, tussock of grass or in a small tree-fern. There the female lays 1-2 pale pink eggs with red-brown spots, which she incubates alone for 36-38 days. The chicks are fed by the female alone and fledge 3-4 weeks after hatching, but continue to be fed by the female for another 3 weeks.
Conservation:
IUCN status – VU (Vulnerable)
This species has a small breeding range and a population of 10.000-20.000 individuals. The population is believed to be declining due to habitat destruction caused by logging and wild fires.