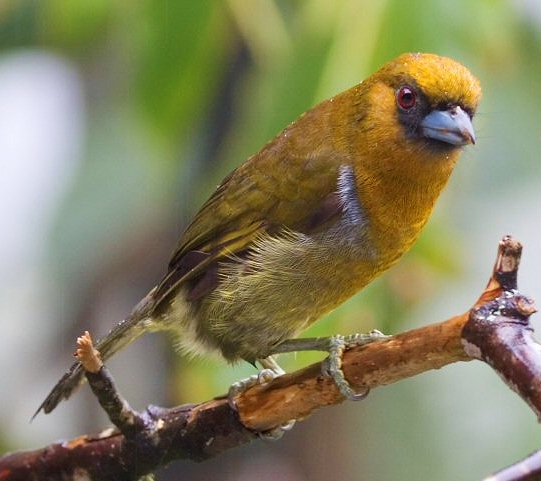 Range:
This species is only found in Costa Rica and western Panama.

Habitat:
The prong-billed barbet is found in cool, moist tropical forests with abundant moss coverage, especially in mountainous areas but also in the lowlands. They are present at altitudes of 500-2.750 m.

Diet:
They mainly feed on the fruits of various trees, epiphytes and scrubs, but also some flowers, nectar and insects.

Breeding:
Prong-billed barbets breed in March-June. They nest in a hole excavated by both sexes on a dead tree, usually 3,5-18 m above the ground. The nest cavity is not lined. The female lays 4-5 glossy white eggs which are incubated by both parents for 13-14 days. The chicks possibly fledge about 1 months after hatching. Each pair raises a single clutch per year.

Conservation:
IUCN status – LC (Least Concern)
This species has a relatively large breeding range and is described as uncommon. The population is suspected to be stable in the absence of evidence for any declines or substantial threats.