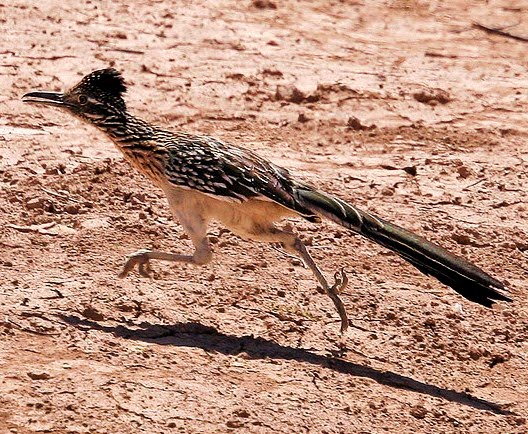 Common name:
greater roadrunner (en); papa-léguas (pt); grand géocoucou (fr); correcaminos (es); wegekuckuck (de)
Taxonomy:
Order Cuculiformes
Family Cuculidae
Range:
The greater roadrunner is found in the south-east of the United States, from Arkansas, Oklahoma and Texas to California, and in northern Mexico.
Size:
These bird are 52-56 cm long and have a wingspan of 49 cm. They weigh 220-540 g.
Habitat:

They are found in open arid and semiarid areas with scattered bushes or thickets, along the edges of chaparral and in sparsely vegetated grasslands.

Breeding:
They breed in May-September. Pairs mate for life, each year the female build the nest while the male provides nesting material. The nest is a compact cup or shallow platform built with stiff twigs and lined with finer material including leaves, grass, feathers, plant seed or pods, snake skins, roots, and dry flakes of livestock manure. The female lays 2-6 white or yellowish eggs which are incubated for 19-20 days by both sexes. Only males incubate at night. The chicks fledge 17-21 days after hatching, but continue to be fed by both parents for another 4-6 weeks. Each pair may raise 1-2 broods per year.
Conservation:
IUCN status – LC (Least concern)
The greater roadrunner has a large breeding range and a global population estimated at 1.100.000 individuals. The overall population trend is stable, but the populations in California are known to be decreasing. Habitat loss and urban sprawl are the major threats to greater roadrunners and the construction of roads causes fragmentation of habitat as well as mortality from cars. Greater roadrunners are also illegally shot in response to the myth that they prey on quail, but feeding studies showed they rarely consume quail.