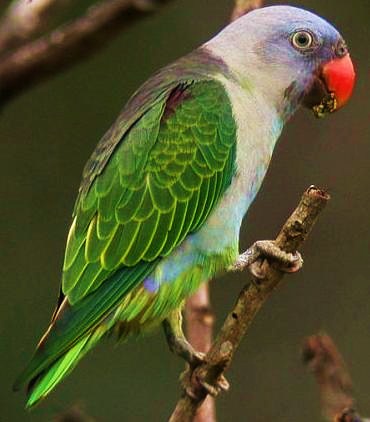 The blue-rumped parrot is found in lowland forests, generally below 700 m, and also in open woodland, orchards and plantations, mangroves, dense scrub, and coconut groves.

They eat seeds, fruit and blossoms.

Breeding:
Blue-rumped parrots breed in February-September. They nest in holes in trees or hill sides. The female lays 3-5 eggs which are incubated for 26 days. The chicks fledge after 6 weeks.
Conservation:
IUCN status – NT (Near Threatened)
Although the global population size is yet to be precisely quantified, it is believed to be in excess of 100,000 individuals. The population is declining due to the rapid rates of forest destruction in the Sundaic lowland, but also because of hunting and trapping. Forest destruction in the Sundaic lowlands of Indonesia and Malaysia has been extensive, in some areas as much as 30% of the forest has been lost in the last 25 years because of logging and land conversion. Still, ability of the blue-rumped parrot to survive in secondary forest as minimized some losses. Trapping for the cage-bird industry is the other main threat affecting this species.