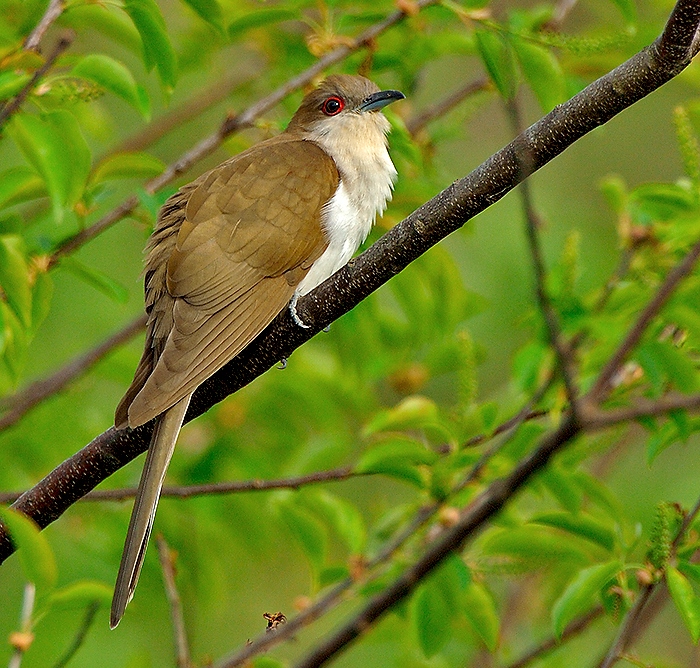 Range:
This species is found breeding in southern Canada, from Alberta east to Quebec, and in the eastern United States, from Montana to Maine and south to Texas and South Caroline. They migrate south to winter in Venezuela, Colombia and through Ecuador and Peru into Bolivia and extreme western Brazil.

Habitat:
The black-billed cuckoo is found breeding in woodlands such as aspen, poplar, birch, sugar maple, hickory, hawthorn, and willow, and also in scrublands, especially near rivers, streams and lakes. They winter in tropical forests and scrublands. This species occurs from sea level up to an altitude of 2.000 m.

Diet:
They are omnivorous, mainly eating large insects, such as cicadas, caterpillars, katydids, butterflies, grasshoppers, beetles, bugs, dragonflies and crickets, but also the eggs of other birds, fruits and seeds, and also snails, aquatic larvae and even fish.

Breeding:
Black-billed cuckoos breed in May-September. They are monogamous and both sexes help build the nest, which consists of a shallow cup made of twigs and grasses and lined with dead or green leaves, pine needles, stalks, plant fibres, rootlets, mosses, and spider webs. It is placed among the leaves of a tree or scrub, up to 2 m above the ground. The female lays 2-5 greenish-blue eggs, which are incubated by both parents for 10-11 days. The chicks are fed by both parents and fledge 16-17 days after hatching and become independent 1 weeks later. Each pair raise 1-2 broods per season.

Conservation:
IUCN status –  LC (Least Concern)
This species has a very large breeding range. There is no reliable population estimate, but the population has undergone a small decrease over the last 4 decades.