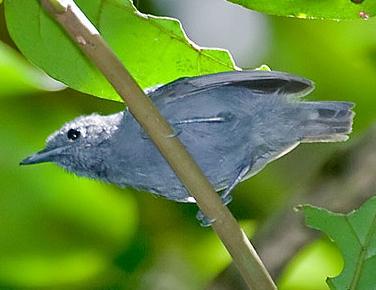 Their diet consists of arthropods, including spiders, beetles, ants and cockroaches.

Breeding:
The Alagoas antwren breeds in February-May. The nest is placed on a tree and the female lays 2 eggs which are incubated for 14-17 days by both sexes. The young leave the nest soon after hatching and follow their parents about, seeking food and shelter.
Conservation:
IUCN status – CR (Critically endangered)

This species is believed to be declining very rapidly owing to the ongoing and rapid loss of remaining forest habitat. The global population is currently estimated at just 50-250 individuals, justifying the current critically endangered status. The massive clearance of Atlantic forest in Alagoas and Pernambuco has left few other sites likely to support populations of this species. Having a mountain distribution that is close to the maximum altitude within its range, this species is also potentially susceptible to climate change.